Below are quotes from the book of the outstanding world-famous scientist Eduard Sarkisovich Markaryan (1929-2011) “Global Aspects of the Armenian Genocide. Experience of Sociocultural Analysis”, 2005. Translation is made by “AGA-Tribunal.info”.

List of the main works of E. Markaryan (in Russian) – here 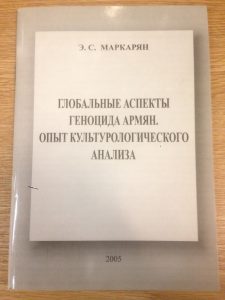 as a threat to international security 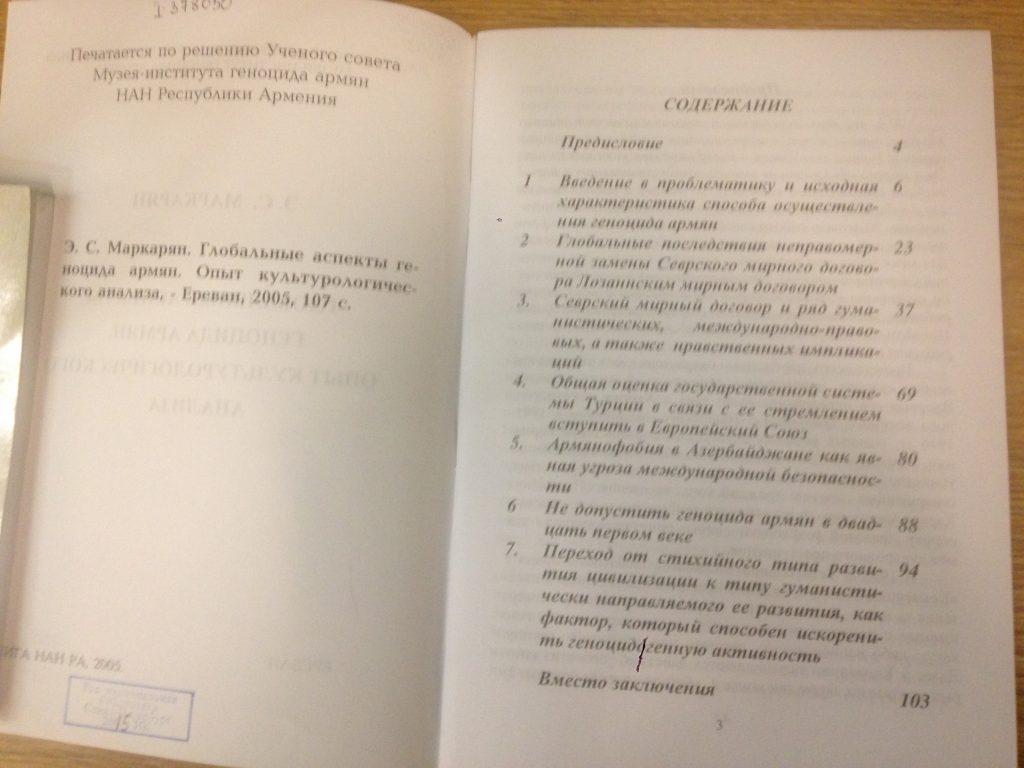 … In Azerbaijan, the situation is much worse than in Turkey, where recently new trends have been outlined in connection with the ongoing processes of discussing the fact of the Armenian Genocide.

… The situation is qualitatively different in Azerbaijan and not at all because in this country the formation of a humanistically oriented behavior cannot fundamentally take place! The problem is that in this state, unlike Turkey, for a number of reasons, conditions have not yet been objectively created that could facilitate the nomination of the Armenian Genocide committed in Azerbaijan on the agenda.

At the very beginning of this work, it was said that when the goal is to overcome the conflict between nations, the most important condition for this should be harsh truthful information about relevant events, about problems that cloud the relationship between these peoples and, accordingly, about those requirements which are put forward. Formulating such a position, I believe that the fulfillment of this requirement is equally important both for the leadership of both countries, different non-governmental organizations, and for those structures of an international level that are called upon to seek various ways to overcome this confrontation.

Indeed, the appearance of the noted group of people who recognized the Armenian Genocide in Turkey did not happen at once, but as a result and during a long discussion in the world of this crime, the publication of a huge number of publications on this topic in various languages.

I don’t know if the Armenian Genocide in Sumgayit in 1988 and its expanded reproduction in the country in 1990 is being remembered Azerbaijan itself? In Armenia, it is well remembered. Unfortunately, however, over the past time, a systematic analysis of the crimes committed was not carried out, and their proper international legal qualification and moral assessment were not methodically given.

A number of existing publications are devoted mainly to the memories of eyewitnesses of those tragic events, to the description of those atrocities caused by very well-organized crowds of rioters – the newly-minted barbarians of the 20th century. This, of course, is valuable material that gives an idea of ​​to what level people can go down during bullying, torture, and violence against their victims. However, along with them, special multifaceted genocidal studies on the events in Azerbaijan in 1988 and 1990 have been required. In addition to descriptions, their scientific analysis with broad generalizations and conclusions is required.

In Azerbaijan, during these events, the same startling lawlessness associated with human rights violations occurred as it was in Turkey. You can’t just read without shudder about all this, about the methods of abuse of girls, women.

A very significant gap is the lack of generalized scientific research, which, in particular, could explain how such atrocities in this country became possible. Moreover, it is very important that such studies be carried out by the Azerbaijanis themselves!

It is well known that the Genocide in Sumgayit was committed in connection with the Karabakh problem.

The Armenian Genocide in Sumgayit, and then the expanded reproduction that followed it throughout Azerbaijan, were a response to the decision (of the extraordinary session of the Council of People’s Deputies of the Nagorno-Karabakh Autonomous Region of the 20th convocation). Shakhmuradyan qualifies this response as a clear manifestation of savagery. If I agree with him in essence, I would suggest moving from a simple statement of the fact of its manifestation to the question of how and in what ways it is possible to overcome the mentality and value system that generate similar barbaric and wild ethnic stereotypes of activity in the world.

In the light of above said, I would like to dwell on one more fact that has taken place relatively recently. In February 2004, one of the NATO peace cooperation events was held in Budapest, in which Azerbaijani and Armenian delegations also participated.

At this meeting, a real drama was played out: one of the officers representing the delegation of Azerbaijan hacked in cold blood an officer from Armenia and tried to break into the hotel room where another officer lived, with the intention of hacking him too. Moreover, this was not at all in an affective state, not as a result of a dispute between them. An Azerbaijani officer premeditated the scenario of the murder, going down to the store for this purpose and bought a murder weapon (a check was even found in his room confirming this). The press unanimously dubbed this case as a phenomenon of xenophobia. This is undoubtedly a true characteristic. But xenophobia itself, as a sociocultural phenomenon, has a number of degrees. This is an extraordinary case.

Indeed, let’s think about this crime.

The substance that carries this key is of a sociocultural nature. It is in it that the most secret secrets of the ethnocultural world are enclosed. Speaking about the ethnocultural properties of the people who live in Azerbaijan, I cannot forget one fact. In the tragic days of the catastrophic Spitak earthquake in Armenia in December 1988, the whole world expressed sympathy and compassion for the Armenian people. But on the freight cars that were coming from Azerbaijan, one could find inscriptions expressing joy over the grief that befell the neighboring people.

I understand perfectly well that not all Azerbaijanis are like that. I talked with many of them at various scientific meetings, communication with some of them was very useful and pleasant. I am sure that same feeling have the colleagues as well. The  Budapest killer does not symbolize a national hero, and they do not urge young people to follow his example, grief of Armenians in catastrophic natural disasters cannot be perceived with joy.

(Ed.: Unfortunately, the author underestimated reality. The book was published in 2005. Markaryan passed away in 2011. And on August 31, 2012, the murderer was extradited to Azerbaijan, where he was greeted as a hero, pardoned by Azerbaijani president Ilham Aliyev despite contrary assurances made to Hungary, promoted to the rank of major and given an apartment and over eight years of back pay. According to Azerbaijani authorities, Safarov was pardoned in compliance with Article 12 of the convention. The extradition was widely condemned by international organizations and governments of many countries, including the US, Russia and France.)

But, unfortunately, there is a certain critical mass of individuals among these people for whom hatred of the Armenians, no matter what, overlaps all other feelings, and this fact should be taken into account. They absorb this hatred since childhood as a result of the Armenian-phobic ideological ruling prevailing in Azerbaijan.

Such are the realities, and they, quite naturally, pose a serious problem, and not only regional! Therefore, the question naturally arises of how to resolve it.

Armenia must, using irrefutable facts, tirelessly prove: Azerbaijan is a state preaching xenophobia and racism, where not a single Armenian, even being a citizen of another country, can feel safe in any way.

The legal folder, she (Marina Grigoryan) continues her thought, properly prepared and justified, submitted to relevant international organizations, distributed in high forums, can have a much greater effect than many toothless statements and meaningless delegations of officials. The only question is who will undertake to prepare this folder and whether the state wants to answer more and more frank challenges of the time and speak the legal language, the language of stubborn facts or is it going to continue to act by inertia. (“Golos Armenii” – “Voice of Armenia” newspaper of December 2, 2004)

The thoughts expressed are very timely. It is important, however, to consider that such a folder, no matter how well prepared, is unlikely to produce the desired effect without the active and individualized response of the relevant international organizations. It is important, for example, to decisively abandon the stereotype of using the parity approach to Azerbaijan and Armenia in all situations: if something is done in relation to one of them, then something similar must be done in relation to the other.

Finally, it is time to realize that the peoples of these countries are carriers of local types of cultures and traditions that are qualitatively different from each other. Both in that and in another country, they can be sources of violations of human rights, norms of democracy and other illegal actions. Nevertheless, it is extremely important to stop using stereotypical approaches in relation to these peoples.

At the beginning of the work, it was already said that Azerbaijan is in many ways the imperial brainchild of Turkey. But in the processes of creating this offspring as a mini-empire, although Turkey managed to pass on to Azerbaijan considerable arrays of its rich experience accumulated in Turkish cultural traditions, this experience could not be sufficient to create a new state formation. For Azerbaijan, the accumulation of its own unique life cultural experience is very essential.

If, in the light of the foregoing, we return to the Budapest episode, then we can most likely make the following assumption: a Turkish officer, all things being equal, would clearly not have gone to the public assassination of an officer from Armenia, especially at a NATO event. The fact is that a very important component of the modern cultural and historical system of Turkey is the installation to increase the country’s image. Apparently, such an attitude is not yet inherent in the current culture system of Azerbaijan.

Azerbaijan is a genocidal (Editor: a new term in Russian геноцидогенный means “genocidal in the core”, “genetically genocidal”, like a generator and an incubator of different genocidal crimes) country. And this feature of it should become the main factor in the system of arguments, which in principle excludes any possibility of including Nagorno-Karabakh in the territorial structure of Azerbaijan.