Below is the article By Catherine Womack from “Los Angeles Times”, Nov 7, 2019. 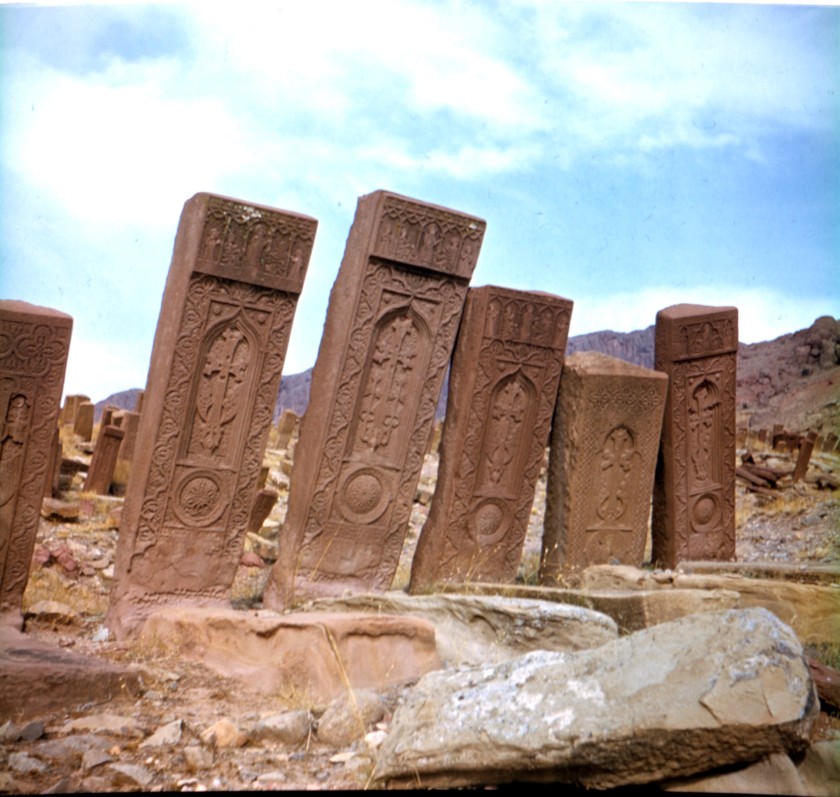 For centuries the sacred khachkars of Djulfa stood tall along the banks of the River Aras — hulking and ornately carved 16th-century headstones, an army 10,000 strong, steadfastly guarding the world’s largest medieval Armenian cemetery. Earthquakes, war and vandalism diminished their ranks, but by the middle of the 20th century, thousands of khachkars still remained.

Today, however, not a single statuesque sandstone sculpture stands at Djulfa, in the remote Nakhichevan region of Azerbaijan. Despite a 2000 UNESCO order demanding their protection, evidence published in the art journal Hyperallergic this year indicated that the monuments were covertly and systematically demolished as part of an alleged Azerbaijani campaign to erase traces of indigenous Armenian culture in Nakhichevan.

The scope of the destruction is stunning: 89 medieval churches, 5,840 khachkars and 22,000 tombstones, the report said. The annihilation of cultural heritage dwarfs the more widely reported and condemned razing of sites by Islamic State in Syria and the Taliban in Afghanistan. Simon Maghakyan, 33, a co-author of the Hyperallergic article, described Azerbaijan’s alleged demolition of these sacred churches and monuments from 1997 to 2006 as “the worst cultural genocide of the 21st century.”

Late last month, inside a ballroom at the Pasadena Convention Center, Maghakyan presented the research behind the Hyperallergic article to attendees at the Armenian National Committee of America Western Region’s Grassroots Conference.

On large screens Maghakyan showed slides of before and after photos, satellite images, Azerbaijani archival documents and video footage — proof, he said, of the Azerbaijani army’s destruction of Armenian sacred sites and artifacts.

Unlike Islamic State and the Taliban, who self-promoted their destruction of historical ruins and monuments, Azerbaijani officials deny that the Armenian cemeteries and churches in question ever existed. The Times asked the Azerbaijan Consulate in Los Angeles to respond to Maghakyan’s research, and the office provided a statement from Nasimi Aghayev, consul general of Azerbaijan to the Western United States, who called the destruction of the Djulfa khachkars “a figment of Armenia’s imagination.”

Aghayev said Azerbaijan is a country of “interfaith harmony and tolerance, and peaceful co-existence of Muslims, Christians and Jews.” Aghayev accused Armenia of destroying Azerbaijani cultural and religious monuments and desecrating Azerbaijani graveyards in Armenia. And he noted Maghakyan is a part-time paid community development coordinator for the Western Region of the Armenian National Committee of America, which he called a “radical Armenian lobby organization.”

Maghakyan, who identifies himself as a political science lecturer, activist and real estate agent based in Denver, said the exhaustive work he has done on the khachkars is a personal passion project.

“It’s not a job, but it is my lifelong cause,” he said in a post-presentation interview. “I can never vacation from this. I tried, but it drove me nuts. If you believe in a cause, you have to pursue it or you’re not going to have an easy time falling asleep at night. I’m stuck with this until something happens.”

Southern California is home to the largest Armenian diaspora outside the former Soviet Union. According to U.S. census data, Los Angeles County is home to more than 200,000 people of Armenian descent. It is a community that pushed hard for the recent House resolution recognizing the genocide of an estimated 1.5 million Armenians by the Ottoman Empire, which is now modern-day Turkey, between 1915 and 1923.

“This is worse than what ISIS did,” Maghakyan told the audience. “How could the world ignore it? How did Azerbaijan get away with this? And if I do not tell this story, who will? I’d never forgive myself if the world never learned of the great cultural genocide of our time.”

“I used to think that when Turkey denies the Armenian genocide, maybe it was mainly because the information is old, or some people really don’t believe it happened. But here we have photos, satellite images, video footage. Denial is not because they are unaware. They know what happened. So denial to me has become so much more sinister,” Maghakyan said.

Nakhichevan is an isolated, oblong region controlled by Azerbaijan but set apart from the rest of that country, surrounded by Armenia, Iran and Turkey. Historically Armenian territory, Nakhichevan today is populated primarily by Azerbaijani Turks. Maghakyan described it as the “North Korea of the former Soviet Union,” closely watched and tightly controlled. Djulfa in particular is difficult to access, situated along the militarized southern border between Nakhichevan and Iran.

As a boy growing up in the Armenian capital of Yerevan, Maghakyan often went with his father to visit sacred cultural sites like Armenian churches, medieval Jewish cemeteries and Azerbaijani mausoleums. Maghakyan remembers his father telling him about visiting the sacred Djulfa khachkars, stone monuments that his father said were sacred because they were built not simply to mark a grave, but to intercede with heaven on behalf of the souls resting beneath them.

The Maghakyan family immigrated to the United States when Simon was 16. Three years later, in 2005, Maghakyan was a college student living in Denver when he came across a Russian news agency report featuring video footage of Azerbaijani soldiers in Djulfa wielding sledgehammers, breaking up the khachkars and dumping the shattered monument in the Aras. (The video was taken by Nshan Topouzian, an Armenian bishop who lived across the border from Djulfa in Iran.)

Sarah Pickman, who co-authored the Hyperallergic article, came across Topouzian’s video footage around the same time. Now a PhD candidate in history at Yale, she was an archaeology student at the University of Chicago at the time and decided to publish a story on the destroyed Djulfa khachkars in Archaeology magazine.

Maghakyan connected with Pickman after reading her Archaeology article, and since then the two have worked together to gather and present eyewitness accounts, historical photographs and other evidence. In 2006 they raised money to buy before-and-after satellite images and produced a short documentary, “The New Tears of Araxes.” (Araxes is another spelling of Aras.)

Around 20 khachkars removed from Djulfa during the Soviet era are held in the collections of museums around the world, including the Metropolitan Museum of Art in New York. (The Met included a khachkar in the well-regarded “Armenia!” exhibition last year.) It’s a bittersweet reality, Maghakyan said, and an example of the conflict that often pops up between Western museums and indigenous peoples when art and religion collide.

Maghakyan is relentless, not only to spread the word about this cultural loss but also to do something about it. In 2015 he successfully got a replica khachkar installed on the grounds of the Colorado State Capitol, a monument honoring victims of all crimes against humanity. Currently he is lobbying the U.N. Security Council to investigate Azerbaijan’s actions in Nakhichevan.

His main goal, though, is simply to get the world to bear witness to an act of cultural erasure, he said.

In the last email Maghakyan received from Topouzian before he died at age 44 in 2010, the bishop wrote, “If we don’t keep speaking about this destruction, in 10 years it will be forgotten history.”

“I don’t know what drove him,” Maghakyan said. “I think there are certain people, when something bothers them and no one is doing anything about it, it’s like you have to. If you’re a witness to something, you may not say anything about it for a while, but that will eventually haunt you. For me, it’s like that. This gives me energy. This is my drug.”